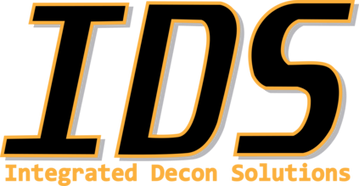 The Latest News About Our Decontamination Solutions

11 January 2016 – The US Department of Homeland Security (DHS) has awarded Integrated Solutions For Systems (IS4S) a $750,000 robot development and demonstration contract. The new Vehicle Decontamination Robots (VDR) will be the first in the world to utilize the IDS unique measurement and spray planning software to fully decontaminate the complex surfaces on the underside of any size vehicle or trailer. The new VDR will also be capable of decontaminating the interior of livestock and freight transport trailers. The VDR is fully autonomous and designed to work simultaneously with the IDS Portable Vehicle Decontamination System. They will be the first in the world capable of autonomously scanning complex surfaces in 3D, planning full-coverage spray patterns, and applying to decontaminate (chemicals, ultra-violet light, fog, steam, etc.) in real-time and without human intervention. The VDRs will significantly reduce the amount of time required to fully decontaminate a vehicle. Future uses for this technology include large-scale surface inspection and coating application, coating removal, de-icing, and construction applications.

30 June 2015 – The US Department of Agriculture (USDA) awarded a contract to Integrated Solutions For Systems (IS4S), the parent company of IDS today. Under the new contract, IDS will upgrade the Portable Vehicle Wash Tunnel System recently demonstrated in Alabama and Wisconsin. The Wash Tunnel system is the flagship product of the IDS decontamination product lineup. It is portable and fully automated, can be deployed in 4 hours by 4 people, and can be operated by a single person. System enhancements under this contract will include sensors, robotics, and an updated software control system. When complete, the overall decontamination performance will be significantly improved through increased pressures and flow rates, a more accurate three-channel injection system, a self-inflating air beam shelter, and a vehicle information archiving capability.

21 April 2015 - IDS' Portable Wash Tunnel was featured in a Department of Homeland Security Science and Technology article today. The wash tunnel is part of a rapid technology development effort that meets the emerging needs of DHS, Canada, and other governments to combat foreign animal disease outbreaks and chemical, biological, and nuclear terrorist events. The DHS article describes the significant need, work with US and Canadian governments, and the overall capability of the system. It also highlights IDS' leadership role in the development of leading-edge technologies for effective disaster response. The entire self-contained wash tunnel system is transported in a small utility trailer and can be fully deployed in less than 4 hours by 4 people. Once in place, vehicles can be decontaminated in as little as 15 minutes - including undercarriage - by a single operator with a handheld tablet. The fully autonomous Portable Wash Tunnel reclaims and recycles all fluid runoff and utilizes disinfectants that minimize the impact on the environment. IDS is a newly formed startup dedicated to bringing innovative disaster response technologies to the marketplace (parent company Integrated Solutions For Systems - IS4S). The DHS article can be found here: http://www.dhs.gov/science-and-technology/st-canada-usda-partner-develop-car-wash-could-protect-food-supply.

29 January 2015 - IDS conducted its second full-scale Non-Freezing Portable Vehicle Wash Tunnel demonstration at Camp Douglas, WI. The demonstration was conducted in conjunction with a USDA National Veterinary Stockpile full-scale exercise hosted by the Wisconsin Department of Agriculture, Trade and Consumer Protection. The compact wash tunnel system was transported approximately 2,000 round trip miles in a small trailer pulled by a pickup truck, deployed by 4-6 people in less than a day, and operated in subfreezing temperatures with sustained winds over 25 mph. More than 50 participants from industry, academia, and state, local, and federal government observed the cleaning and disinfection of a farm-type tractor and a render-haul vehicle. Participants evaluated the performance of the prototype system and provided valuable feedback on their observations and suggested upgrades. The efficacy of the process was validated with test plates attached to each vehicle in multiple locations. The plates were pre-inoculated with non-harmful viruses and bacteria to determine if the automated process is as effective as manual cleaning and disinfection typically performed during animal disease outbreaks. The testing was performed as part of a US-Canadian collaboration. Results of the validation tests are expected by mid-2015. IDS is leveraging a series of proof of concept demonstrations to mature the system, validate performance, and launch a variety of related products in the near future.

21 September 2014: Integrated Solutions for Systems, Inc. Huntsville, Alabama, has been awarded a $200,000 contract for the commercialization of its recently developed Portable Vehicle Wash Tunnel prototype system. The wash tunnel is fully self-contained, transportable in a 16 ft. trailer and can be set up in 4 hours by 6 people. Housed in a rugged inflatable shelter, the wash tunnel's autonomous gantry system is capable of decontaminating a variety of vehicles and equipment with no operator intervention, an award of the Department of Homeland Security's Commercialization Readiness Pilot Program (CRPP), the contract enables IS4S to finalize and mature the wash tunnel system into a fully commercialized product line. As part of this effort, IS4S will spin off a wholly-owned subsidiary, Integrated Decon Solutions (IDS) in January of 2015.